The airborne assault to capture the bridges over the River Rhine at Arnhem began on 17th September 1944.  The 1st. Battalion, Border Regiment, was in the first wave of glider-borne troops.  Almost from the beginning they met fierce resistance from the Germans and suffered many casualties.  On 21st September, the Battalion, with a force of paratroops, held a bridgehead over the Lower Rhine, near the twon of Oosterbeck.  Private George Wilson's company was in a position on high ground at Westerbouwing.  The company was attacked by tanks, artillery and flame-throwers and eventually overwhelmed.  George was reported wounded, then missing, after this gallant action.  It was only in July 1945 that his parents received confirmation of his death.

George was the son of Joseph and Ettie Wilson.  He was aged 22.  He attended St. Jame's Church and School and was formerly employed at Longholme Mill, Rawtenstall.  Also George's brother, Robert, died of wounds in France on 12th August 1944. George is commemorated on the Groesbeek Memorial, Holland.  The Memorial stands within the Groesbeek Canadian War Cemetery and names more than a thousand members of the Commonwealth forces who died in Belgium and Holland since the end of August 1944, and have no known grave.  George is named on Panel 4. 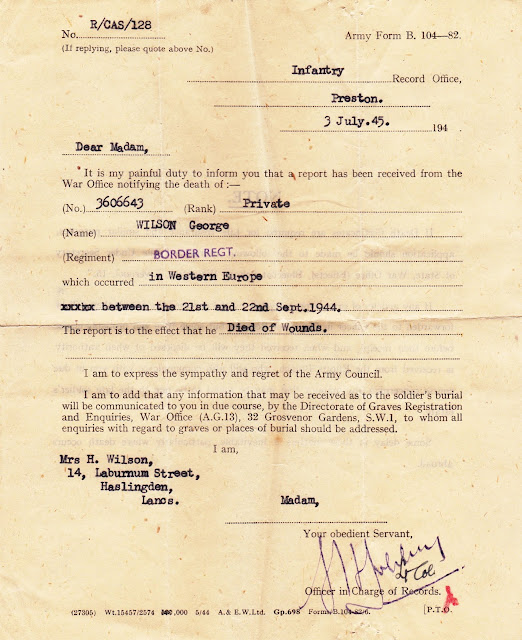 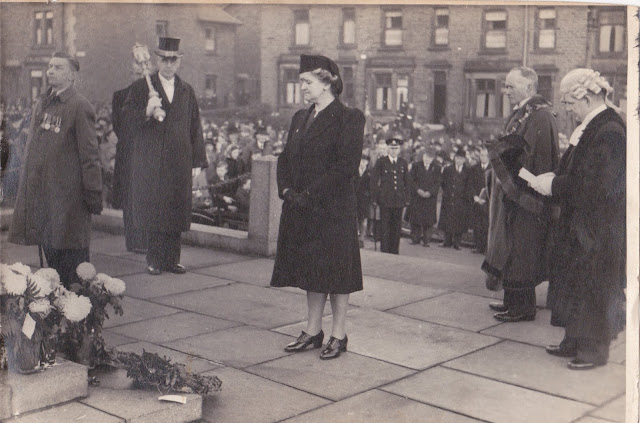 George Wilson is now known to have been buried in an unmarked grave in Arnhem-Oosterbeek War Cemetery, Netherlands after the battle. His grave, 31/B/03, along with five other so-far unmarked Border Regiment graves, was re-dedicated on 14 September 2016 by the Duke of Lancaster Regiment’s Regimental Chaplain.

As opposed to the aforementioned historical background, George Wilson did not serve with the company which had established defensive positions at the Westerbouwing - a 100 ft. bluff with a restaurant overlooking the river Rhine, defended by B Coy 1st Border. George served with D-Coy, some 400 yards to the north-east. D Coy were in defensive positions on the Oorsprong estate. Oorsprong House was a stately country house built in 1920-1921 in order to replace an 1828 manor-house which burnt down in 1919. The new country house was completely destroyed during the Battle of Arnhem. Shortly after the war George Wilson’s field grave was found just outside the ruins of Oorsprong House, by a British Graves Registration Unit. At that time all the grave marker read was “Wilson”, hence his remains were re-interred in Oosterbeek War Cemetery as “Known unto God”.
Posted by Bryan Yorke at Friday, April 24, 2015