The funeral of the late Private. William Chippendale (35), East Lancashire Regiment, took place with military honours at Haslingden Parish Church yard on Tuesday afternoon, and was witnessed by a very large number of people.  Deceased was formerly a carter for Messrs Heys Brothers, carriers, and was very popular among the tradespeople of the town, with whom he came much in contact.  His father whose Christian name he bore, was a carter with Haslingden Corporation.  Deceased resided with a sister at 34 Back Wilkinson Street.
His mother and other sisters reside at Flaxmoss Street.  Deceased enlisted over two years ago.  In March he sustained a very bad wound in the head, and he came to England for hospital treatment.  He was over in Haslingden a fortnight or three weeks ago, when he was not looking well.  Later he had influenza.  The Preston depot sent men to act as bearers and also the bugler; and men from the Haslingden Public Hall Hospital formed the firing party, for the funeral, and among the wreaths was one from the hospital in the north at which he died.  Rev. G.W. Clarke, M.A., vicar, conducted the funeral.  Private Ernest Slack, A.R.C.O. one of the patients at the Public Hall Hospital, played the "Dead March" on the organ at the service in the church.  Messrs. Cockerill Bros. were the undertakers. 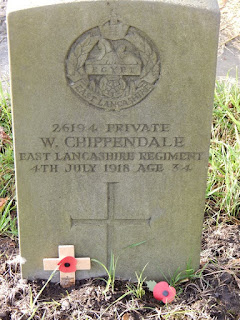 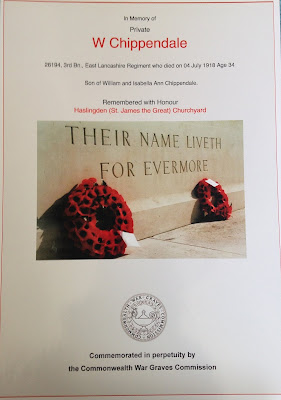