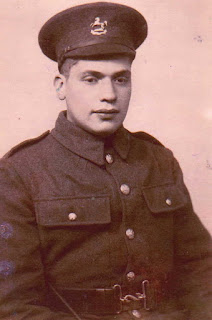 Joshua Dixon was born in Haslingden in 1893. He was the son of Paul &amp; Jane E. Dixon of Sherfinside, Haslingden. In 1901 Joshua was living at 1, Sherfin Nook, Haslingden, with his parents, brother William and sisters Hannah and Alice. Joshua, then aged 7 was still at school.
Joshua was killed in action at the Battle of the Menin Road Ridge on 20 September 1917. He was 24 years old. He was the brother of William Dixon, who is also commemorated on Stonefold War Memorial. Joshua Dixon is buried in Dochy Farm New British Cemetery, near Zonnebeke, Belgium.

"On 20 September the Battalion took part in the Battle of the Menin Road Ridge. The weather had gradually improved from the previous month and 20 September was therefore chosen for an attack by British forces on an eight mile front extending from the Ypres-Comines Canal just north of Hollebeke to the Ypres-Staden railway north of Langemarck.
Zero hour was 5.20 am. Even before then conditions proved very difficult for the Battalion getting into position for the attack. The night was very dark and in spite of the optimism about the weather it was raining heavily. The "front line" was an ill-defined line of shell holes.
At 5.40 am the leading waves of the Battalion advanced as close to the British artillery barrage as possible, followed by the rear waves. Almost immediately heavy machine gun fire came from the German strongpoints known as Kaynorth, Iberian and Hill 35 and the Battalion suffered casualties.
Progress was terribly difficult. No Man's Land was a mass of shell holes mostly full of water and the ground was deep in mud which clung to the boots and equipment of the attackers. The leading waves were held up by Kaynorth and Iberian which were comprised of a number of reinforced concrete "pill-boxes".
The supporting waves pushed on and reinforced the leading waves. Several attempts to take the pillboxes failed as the German cross fire was heavy and prevented progress. The most bitter fighting took place at the strongpoint Iberian and it was not until 6.45 am that it was finally stormed. At about the same time Kaynorth was taken.
By 7 am, the first objectives captured, the Battalion advanced on Delva Farm, their second objective. This was gained by 8.30 am after only feeble resistance. At 5.30 pm the Germans shelled the Battalion's positions and a counter-attack threatened but did not materialise.
At some point in the attack Pte. Dixon was severely wounded and died later". From – Bill Turner’s Book.

"May his reward be as great as his sacrifice."

Ever remembered by his Aunt Mary Jane and Family, Sherfin.