William Pickard was born in Edenfield in 1899. He was the son of David Carr and Sarah Alice Pickard. In 1901 he was living with his parents at 5, East Street, Edenfield. He was a member of Stonefold Church and Sunday School, and was on the Stonefold Church Roll of Honour. Prior to the war William was employed at Birtwistle’s Carr Mill, Haslingden, as a stripper and grinder. He had been in France for about five months, when he  was killed on 27 September 1918. He was 19 years of age and unmarried. At the time of his death the family lived at Blackburn Road, Haslingden.

"On 7 September 1918 the 7th K.S.L.I. were engaged in the Second Battle of Bapaume. They made a most gallant advance, (in which Pte. Pickard probably took part), but suffered a total of 248 casualties. Notwithstanding this, they were, after a further period in the trenches, ordered into the line on 20 September to take part in the Battle of the Canal du Nord seven days later.
At 5.20am on 27 September the Battalion, together with the 2nd Royal Scots on the left and the 1st Royal Scots Fusiliers in support, advanced towards the German positions 900 yards away. The attack, in spite of a heavy bombardment with gas shells by the Germans, which started at 3.30am and lasted until four, was a complete success. They gained their objective in spite of severe opposition. 'A' Company, on the right, had a particularly stiff fight to gain their objective, losing their commander, a platoon officer and 34 men. The centre company, pushing on slightly in front of their objective, captured a German battalion commander and 150 of his men. In addition the Battalion captured 52 machine guns, 4 trench mortars, 3 anti-tank rifles and 350 prisoners.
Two officers and 37 men were killed in the attack and three officers and 127 men wounded". – From Bill Turner’s Book.

Official information has been received of the death in action in France of Private William Pickard of Blackburn Road, Haslingden.
The deceased was formerly employed at Birtwistle's Carr Mill, Haslingden, as a stripper and grinder, and was highly respected and esteemed both by master and employees.
He was a member of Stonefold Church and Sunday School.  He had been in France about five months and was killed on the 27th of September.  He was 19 years of age.

In loving memory of Pte., William Pickard, of the Shropshire Light Infantry, killed in action in France, 27th September 1918.

"When last we saw his smiling face,
He looked so strong and brave,
We little thought how soon he would
Be laid in a soldier's grave."

From his Father and Mother

"No pen can write, no tongue can tell,
Our sad and bitter loss,
But Thou, O Lord, has helped us well,
To bear the heavy cross."

From his sweetheart, Miriam.

"Far away from all who loved him,
In a foreign land unknown;
But his name in gold is written
In the hearts he left at home."

From Uncle and Aunt and Grandma and Cousin Ivy, Higher Cloughfold.

"We pictured his safe returning,
We longed to clasp his hand,
But God has postponed the meeting,
Till we meet in the Better Lane."

From his Uncle and Aunt, Manchester.

"He sleeps beside his comrades,
In a hallowed grave unknown,
But his name is written in letters of love,
On the hearts he left at home.

May the heavenly winds blow softly,
O'er the sweet and hallowed spot;
Though the sea divides his grave and us,
He never will be forgot.

We loved him, Oh! No tongue can tell,
How much, how dearly, and how well.

"Days of sadness still come o'er us,
Tears in silence often flow,
Thinking of the day we lost you,
Just one year ago."

From his uncle and aunt, Trafford Park, Manchester.

"He was a good lad, true and kind,
He proved to us in heart and mind,
And while on earth with us he stayed,
He earned the crown he wears to-day.

From his uncle and aunt and grandma, Cloughfold. 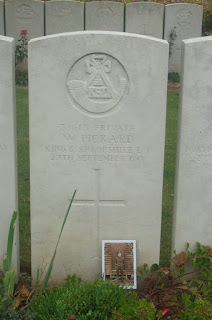