The Japanese invaded Malaya (now Malaysia) on 8 December 1941. They crossed the Straits of Johore onto Singapore Island on 8 February 1942. The 1/5th. Battalion, Sherwood Foresters, were gradually forced back towards Singapore city by the overwhelming pressure of the Japanese advance. On 15 February, the day Singapore capitulated, the Sherwood Foresters were still fighting against all odds, to hold on. They were forced to surrender and became prisoners of war in Changi Gaol. From there, many were sent to work on the Burma (now Myanmar), to Siam railway. Private Albert Rothwell died there as a result of malnutrition, overwork and cruel treatment.

Albert was the son of David and Janie Rothwell. He was aged 28. He was connected with Trinity Baptist Church and Sunday School. After attending Haslingden Central Council School, he entered his father's business as a house furnisher.

Albert is buried in Kanchanaburi War Cemetery, Thailand, (formerly Siam). The cemetery is on the site of the former base camp through which most prisoners passed on their way to other camps and the railway. There are 5,084 Commonwealth casualties buried or commemorated in the cemetery. Albert lies in Plot 8, Row K, Grave 3.

Above left photo is of Albert's temporary grave and cross.  A photo of his permanent grave which is looked after by the war commission in Kanchanaburi Cemetery is shown here:

Below is the rear of a postcard posted from Bombay dated 29th December 1941, and the text reads: Dear Dad, Mother and Leslie, I am still allright and hope you are the same.  I am always thinking of you and expect you do of me.  Your loving son Albert. XXXX for you all.  (This must have been posted as he made his way to Singapore where he was captured).
And below is both sides of a letter posted via the Red Cross presumably from the POW camp. The front of the letter has Japanese characters, the rear begins Dear Dad, Ma, and Leslie: 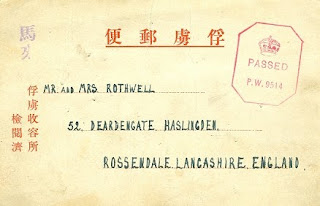 Here below is the front of an envelope written by Albert's Dad and posted to Albert on 9th May 1943.  At this time Albert had already died but his dad was unaware of this fact when he wrote and sent this letter.  The envelope was returned with a blue stamp saying undelivered due to the addressee is reported deceased.
And below is a scan of the actual letter sent by Albert's dad and contained within the envelope above, the content reads: Dear Son, Once again I am writing hoping to find you as well as can be expected.  We are all well at home and at Blackburn and looking forward to the day when we shall see you again and what a day when it is all over and the Lads are all back again.  We are carrying on at the shop and everything is allright and the weather today is very nice here.  Well all the best again and we look forward to hearing from you.  Best love from Mother, Dad and Leslie XXXXX.
And finally below is a letter from the War Office confirming Albert's death on the 2nd April 1943.