The Ball Brothers Family Story:
Nicholas Ball was born in Tarleton and by the time of the 1891 census had moved to Accrington and was living with his wife Betsy and six children at Higher Antley Farm. 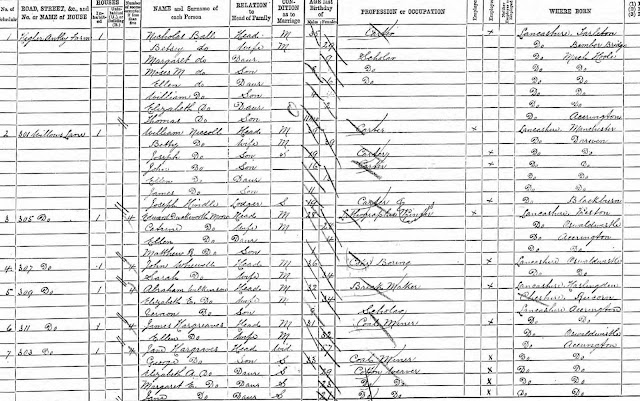 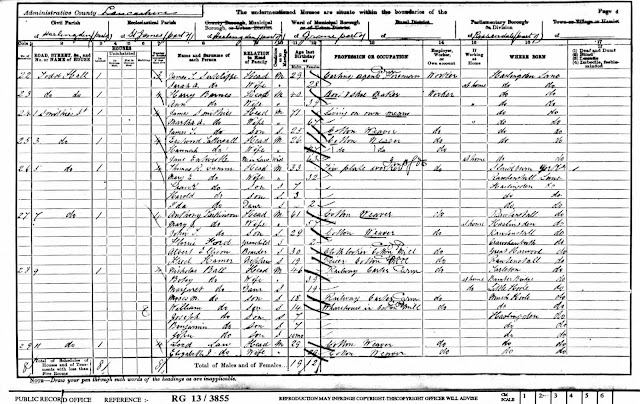 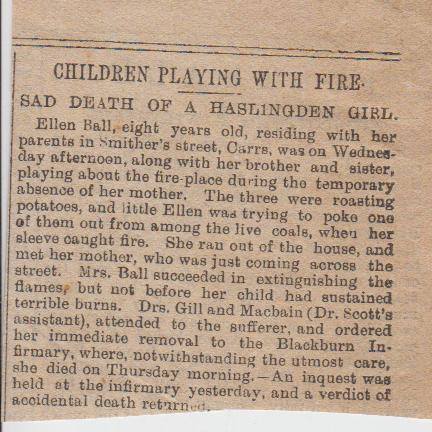 Nicholas Ball bought a grave at St. James in Haslingden and on the 8th June 1892 buried his son Thomas aged 2 and his daughter Elizabeth aged 3 years old.

This left daughter Margaret and sons William, Joseph and Benjamin (twins) still alive and living together in the 1911 census still at 9 Smithies Street, Cars.

Moses had married by 1911 and was living with his wife and had become a Hay Straw and Egg dealer. 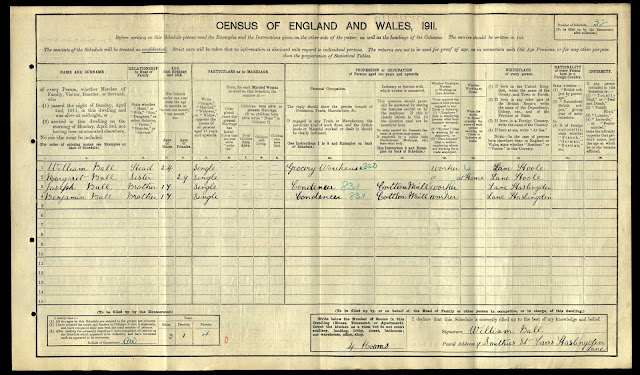 Today's story comes from Rising Bridge where Walter Cockerill lived with his wife Robertha Ellen and 7 children in Oak Avenue at the start of the 2nd World War.

One of the children Jim Cockerill was born in 1925 and enlisted as a Private in the Green Howards stationed at Bradbury Lines in Hereford in 1942 aged 17.

His brother Walter Cockerill was injured at Arnhem but returned home to live in Rising Bridge.  His brother Fred also served during the 2nd World War. 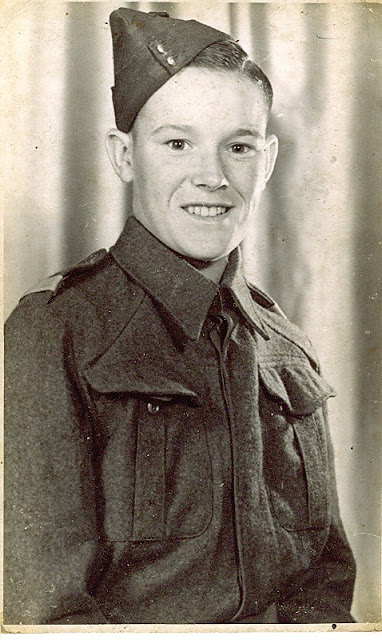 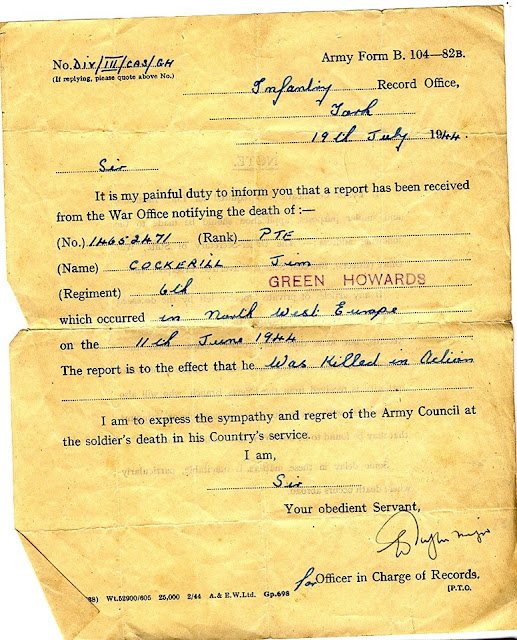 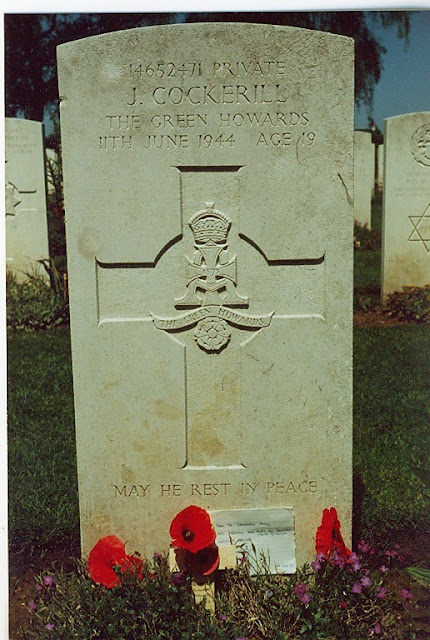 George Yorke born in Haslingden on the 2nd January 1877 to parents George and Hannah Yorke who had both arrived in Haslingden in the 1860's  George Senior was born in Suffolk and Hannah was from London.  George senior died in 1880 aged just 36 leaving his widow and five young children.

George junior lived with his family until 1898 when he married Sarah Ann Cockerill at St. James Church in Haslingden.  By the time of the 1911 census the family were living at 3 Church Lane, Haslingden where George was a cotton operative and aged 35 years old.

George enlisted in the Lancashire Fusiliers and was killed in action on the 13th January 1918 aged 42 years.  He also left a widow and four children. 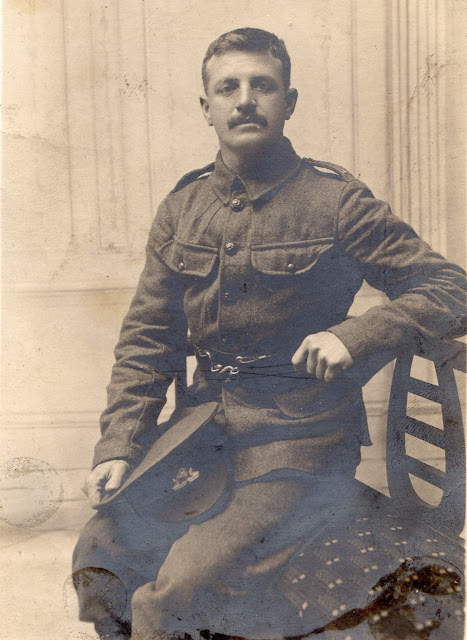 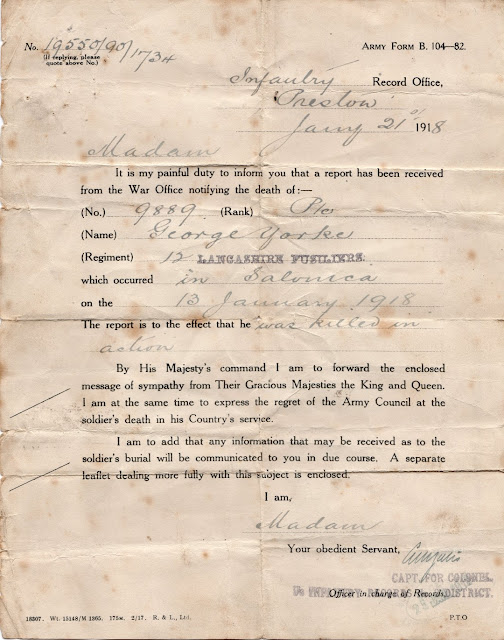 "War Heroes" - The Medals and Decorations

"Cenataph Photos" and other related photos 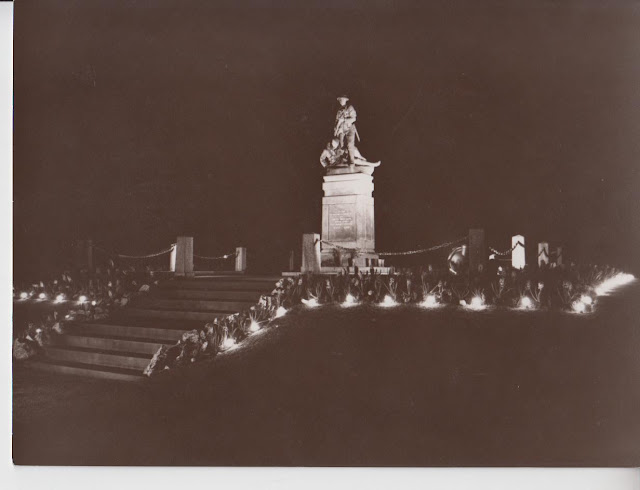 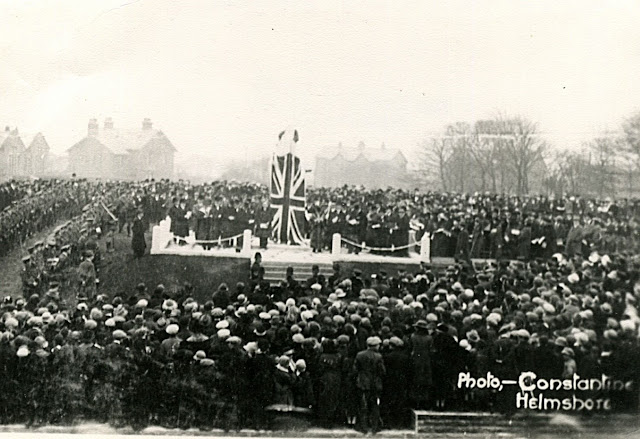 These lines are dedicated to those Brave Comrades who nobly and gave their lives in the ever memorable Battle of Spion Kop which took place on January 24th 1900.

1)      Will you kindly pay attention,
To my story, sad but true;
A few words I will mention,
That concerns both me and you.

2)      It was on the 23rd of January.
As we rested behind Three Tree Hill,
That the order came along the line,
Which caused many a heart to thrill.

3)     Spion Kop had to be taken,
By the lads of the Lancashire Brigade,
With the Twentieth in front to hear the brunt,
The assault had to be made.

4)     The Kings Own and the Fortieth,
Who never yet knew fear,
With the T.M.J’s and the Sapper Boys,
Gave their aid the hill to clear.

5)     Along the uneven ground we marched,
In silence deep as death;
And when we got to the hill,
We halted to take our breath.

6)     With bayonets fixed, we crept along,
And pressed on with a will,
For to uphold Old England’s honour,
And to avenge Majuba Hill.

7)     When the summit we had gained,
Many a heart was beating fast.
And in the damp cold morning air,
The challenge came at last.

8)      Halt! Who goes there? A voice rang out,
In a tongue both strange and queer;
A rifle shot, a bayonet charge,
And a gallant “British Cheer”.

9)       On, on we charged; the enemy fled,
The hill was ours at last;
All hopes rose high as the morn drew nigh,
For the danger that was past.

10)     Alas our hopes were soon dispelled
As we soon found to our cost,
For the Boers again tried to retake,
The position they had lost.

11)     As through the clouds the sun appears,
Driving the mist away,
All hearts beat fast, for low at last,
We hold the Boers at bay.

12)     The Lancashire’s and Engineers,
And T.M.J’s as well,
Line the trenches all around,
Their lives to dearly sell.

13)     The battle raged both fierce and fast,
Throughout the livelong day;
And ere the sun set in the west,
Many a soul had passed away.

14)     Their’s many a mother in dear old England,
Who will often shed a tear.
When she thinks of her boy – her hope and joy,
But from whom she no more will hear.

15)     Far, far away, over the hill,
In Natal a resting place they’ve got,
And these they lie, side by side,
On the heights of Spion Kop.

Another beautiful poem written by a Haslingden soldier serving in South Africa in the late 1890s. The original is done in pencil on writing paper and penned in script.  We are indebted to Jane Siddall for kindly sharing these rare “soldiers poems”.

“One more embrace; then o’er the main
And nobly play the soldiers part,”
Thus speaks, amid the martial strain,
The Spartan mother’s aching heart,
She hides her woe,
She bids him go,
And tread the path his father’s trod,
“Who fights for England, fights for God”.
Helpless to help, she waits, she weeps,
And listens for the far-off fray,
He scours the gorge, he scales the steeps,
Scatters the foe-away; away!
Feigned, as their flight,
Smite! Again smite!
How fleet their steeds! Now nimbly shod,
She kneels, she prays; “Protect him God”,
The sisters sigh, the maiden’s tear,
The wife’s the widow’s stifled wail,
These nerve the hand, these brace the spear,
And speed them over veld and vale.
What is to him,
Or life or limb,
Who sends the chain, and breaks the rod,
Who falls for freedom, falls for God.
And should it be his happy fate,
Hale to return to home and rest,
She will be standing at the gate,
To fold him to her trembling breast,
Or should he fall,
By ridge or wall,
And lie neath some green southern sod.
“Who dies for country, sleeps with God.

"A Poem written by a HASLINGDEN soldier called Jonathan Lambert on February 5th 1894, who was in the Lancashire Fusiliers and fighting the wars in South Africa. (kindly contributed to the blog by Jane Siddall and uploaded here on 25th October 2015) The original is on paper and penned out in beautiful script (a sample shown below)
1) The cottage was a thatch'd one,
the outside old and mean,
yet everything within that cottage,
was wondrous neat and clean
2) The night was dark and stormy,
the wind was howling wild,
A patient mother knelt beside,
the death bed of her child
3) A little worn out creature,
His once bright eyes grown dim,
It was a colliers only child,
they called him little Jim
4) And oh to see the briny tears,
fast hurrying down her cheek,
As she offer'ed up a prayer in thought,
she was afraid to speak
5) Least she might waken one she loved,
far better than her life,
for there was all a mothers love,
In that poor colliers wife
6) With hands uplifted see she knelt,
beside the sufferers bed,
And prays that he will spare her boy,
And take herself instead
7) She gets her answer from the child,
Soft fell these words from him,
Mother the angels do so smile,
And beckon little Jim.
8) I have no pain dear Mother now,
But oh I am so dry,
Just moisten poor Jim's lips again,
And Mother don't you cry
9) With gentle trembling haste she held,
the tea cup to his lips,
he smil'd to thank her as he took,
three little tiny sips.
10) Tell father when he comes from work,
I said good-night to him,
and mother now I'll go to sleep,
Alas poor little Jim.
11) She saw that he was dying,
the child she loved so dear,
had uttered that last words that she,
might ever hope to hear.
12) The cottage door was opened,
the colliers step was heard,
the Mother and the father met
yet neither spoke a word.
13) He knew that all was over,
He knew his child was dead
He took the candle in his hand,
And walked towards the bed.
14) His quivering lips gave token,
Of grief he'd fain conceal,
And to see his wife has joined him,
the stricken couple kneel
15) With hearts bowed down with sadness,
they humbly ask of him,
In heaven once more to meet again,
their own poor little Jim
At the end of the poem is a little note:
Dear Hannah I got little Jim,
because you ask me for it
write back and let me know,
how you are getting at home
******************** 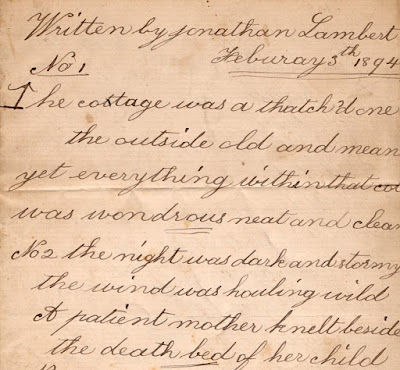 "Stories and contributions from other soldiers and their families" 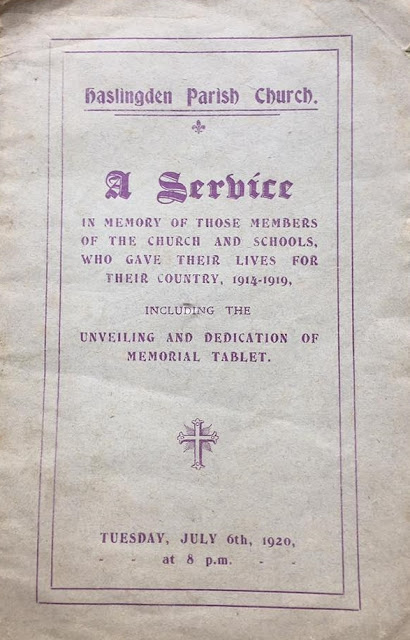 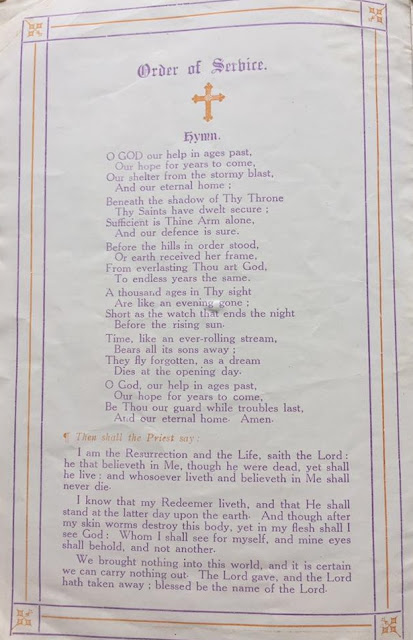 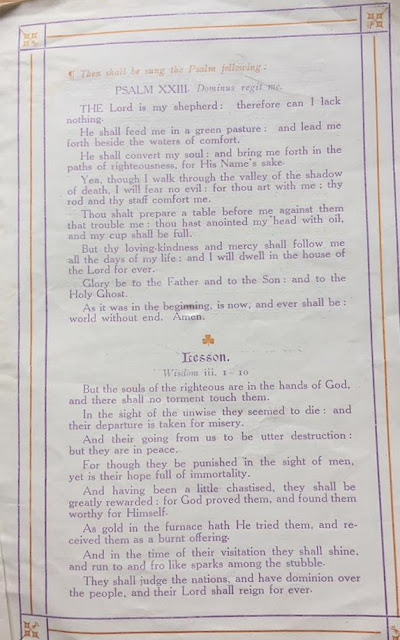 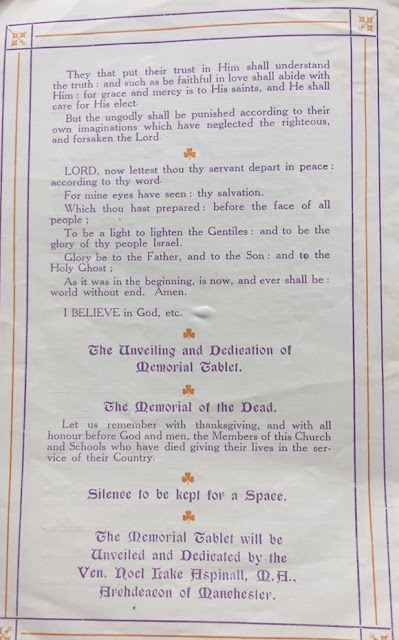 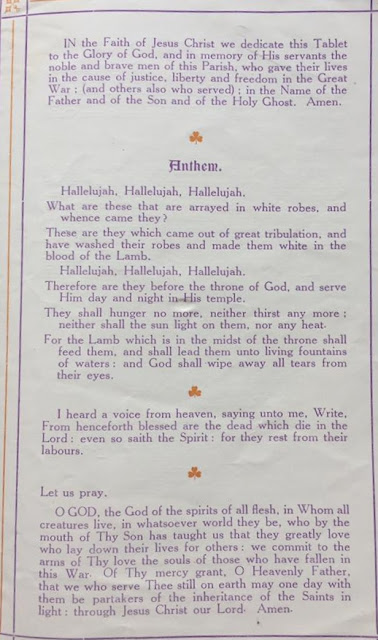 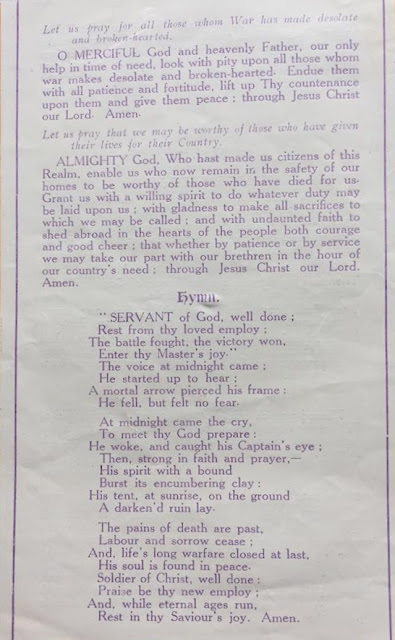 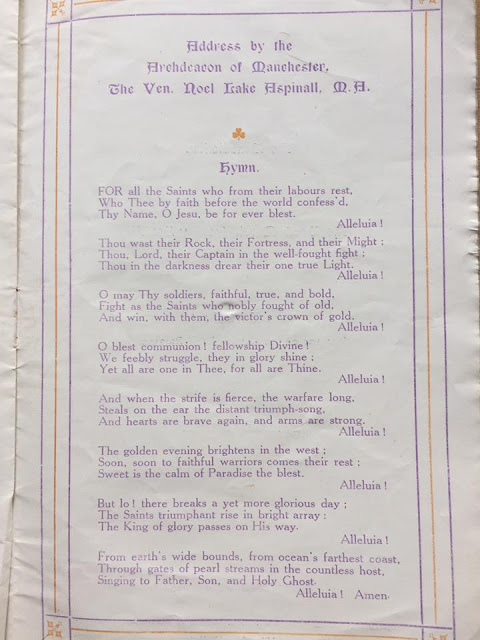 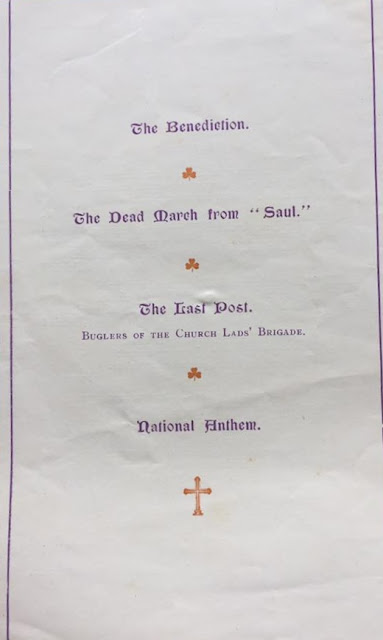 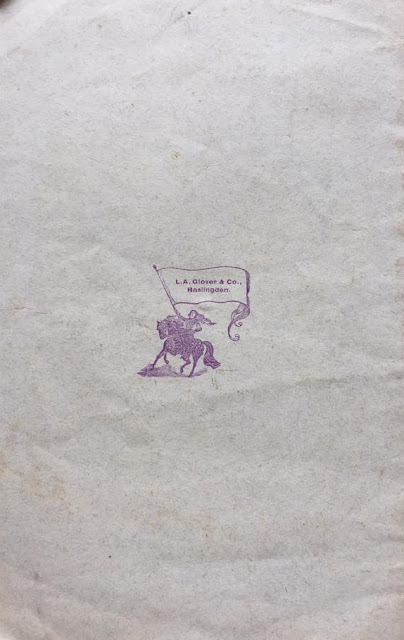 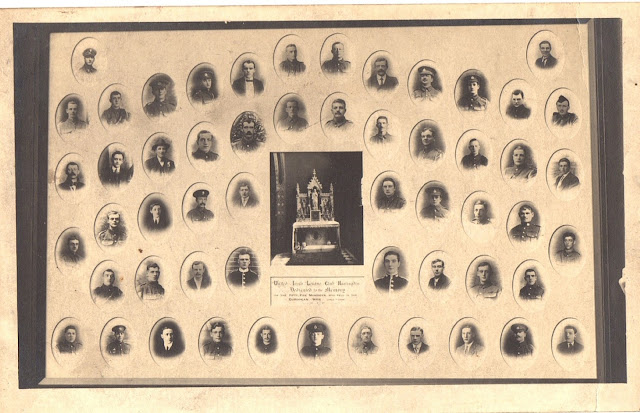 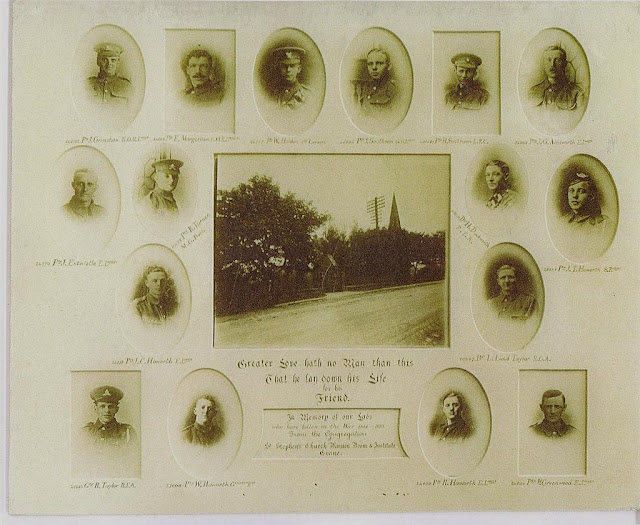